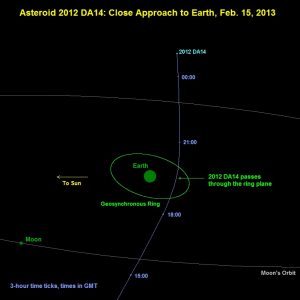 The diagram on the left, published by NASA, shows how asteroid 2012 DA14 is affected by earth.  At the time of closest approach Asteroid 2012 DA14 will be only about 17,200 miles (27,700 kilometers) above Earth’s surface. This distance is outside Earth’s atmosphere,  inside the belt of  geostationary satellites, and one-tenth of the distance to the moon.

Although the asterioid’s path will be bent by earth’s gravity, according to NASA, there is no chance it will impact our planet.  Asteroid 2012 DA14 is 50 yards across, about half the size of a football field.  If it were to impact the earth we would experience the explosive energy of 2.5 megatons of TNT. This is about 200 times the size of the atom bomb that hit Hiroshima in Japan.

In any case, Asteroid 2012 DA14 is very special because it is the first large object, in modern times, we have observed to closely fly-by. Says Don Yeomans of NASA’s Near Earth Object Program at JPL. “Since regular sky surveys began in the 1990s, we’ve never seen an object this big get so close to Earth.”

If you happen to be in Eastern Europe, Asia or Australia , during the time of closest approach at 2:24 p.m. ET Febuary, 15 2013 get yourself a good pair of binoculars, or even better, a moderately powered telescope. You just might be able to spot asteroid 2012 DA14  moving relatively quickly as it crosses the sky from the south to the north.